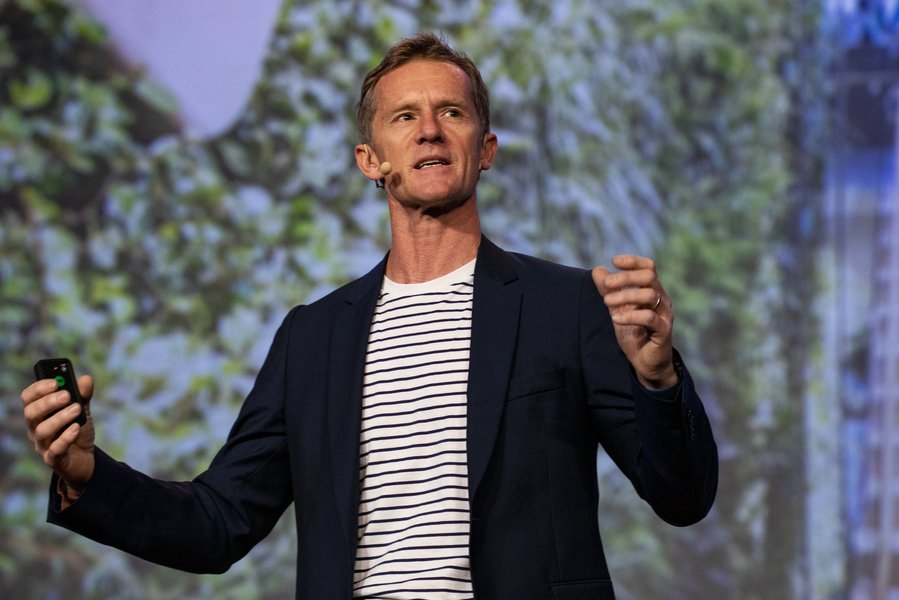 “You win gold medals by recovering better, not by working harder.”

Duncan spent nearly 3 decades working as a property professional with international Property and Instrastructure business, Lendlease, before moving on from his role as Head of Workplace Health and Wellbeing earlier this year. “With Lendlease, I helped to design environments – physical, digital and social – where people can flourish. We created spaces that promoted dynamic movement and discouraged inactivity, as well as performing organisational interventions to help support wellbeing goals. For instance, we would provide detailed maps of where staff could take walking meetings instead of being tied to conference rooms, because that not only gets people moving, but has also been shown to increase creative and divergent thinking by up to 60%.

“We also recognised the importance of tacit knowledge being passed socially between colleagues, so we created physical spaces that modelled the activities we wanted to promote: informal areas which encourage staff to make eye contact, linger and connect. The secret to wellbeing is small, intentional steps. So, where there are lifts, there are also stairs. Where there is food provided, it’s fibre-rich and full of nutrients. Ultimately, if you want to make something a big part of your life, you need to make it a big part of your environment. It’s about giving people good options, and supporting those decisions with good research.” 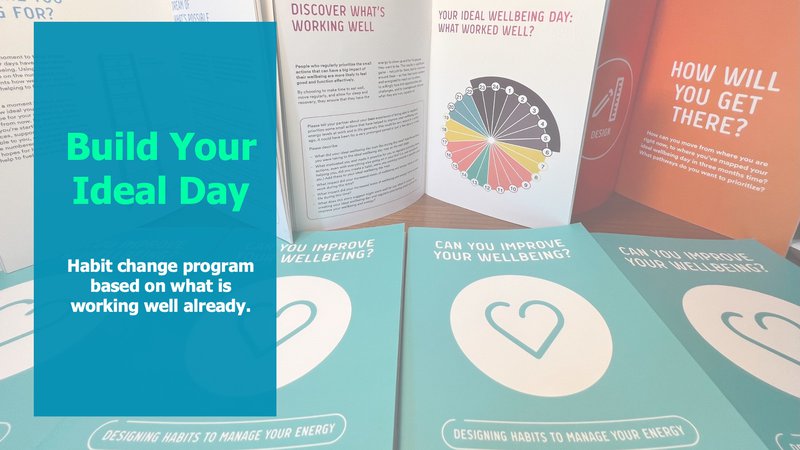 There’s no doubt that our work and our working environments play a significant role in our overall wellbeing, Duncan says. “We’re living 6-9 years longer than our parents, which means we’re also working 10,000 more hours over our lifetimes than they did. If you work in a building with high fresh air rates, lots of natural daylight, a good social environment and biophilic design elements, you’ll be more connected, you’ll have greater job satisfaction, you’ll even sleep better. You also have to remember that we take a lot of our identity from our work, so feeling that we’re making a meaningful contribution there has significant wellbeing benefits. The Japanese have a word for that sense of purpose: ikigai.”

The recipe for wellbeing is hugely personalised to the individual, Duncan says, and its impacts are often inter-dependent. “The World Health Organisation describes mental wellbeing as a state ‘in which an individual realises his or her own abilities, can cope with the normal stresses of life, can work productively and is able to make a contribution to his or her community,’ but that doesn’t look the same for everyone. I start every day by walking our rescue greyhounds, then I have a swim at the beach with a group of 50-100 people and we have coffee afterwards. That’s my routine and the secret to maintaining my wellbeing. It’s good for my cardio vascular health, it nourishes me socially and it also helps to reset my circadian rhythms. But I understand that everyone needs to build their own bespoke wellbeing programme. That understanding is the foundation that underpins a series of health and wellbeing challenges I’ve created called Build Your Ideal Day.”

Duncan now works as a wellbeing consultant for both corporates and individuals, and defines his work in three key pieces. “The first part of the work is building awareness: talking (speaking), blogs and podcasts. The next is fostering curiosity, which I do primarily with customised data sets & biofeedback devices. The last is using that information to embed habit change.” The data Duncan is collecting comes from biofeedback devices for “corporate athletes” which measure heart rate variability. “This isn’t your heart rate, but rather the distance between the beats of your heart. Measuring that with portable ECG machines enables us to find out when people are stressed – that’s called sympathetic dominance – or when they’re in a rest and digest recovery state – that’s called parasympathetic. 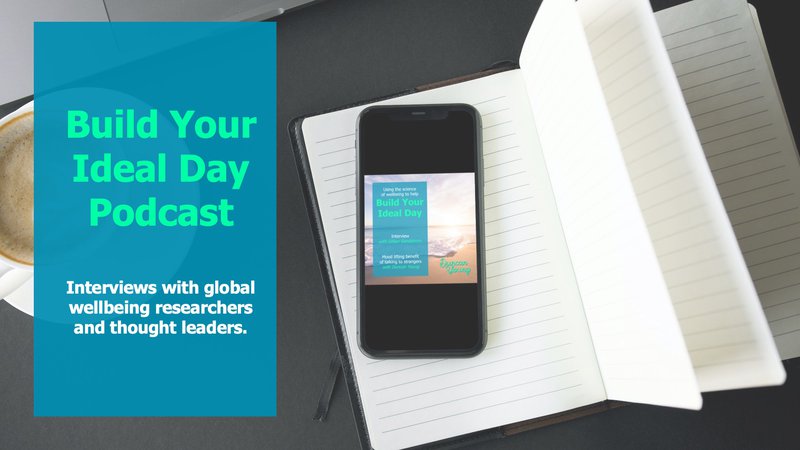 “I have spoken to more than 20,000 people about their wellbeing and they generally take it all in, but often forget it entirely once I leave the room. When they can see and track their own data, they get a really different view of it all. I tell clients to wear the ECG for 3 days living their normal life and then try a few different things to see how it impacts the results. When you get your report, it not only gives you a resting heart rate, but also gives you your VO2 max, which shows how readily your blood can carry oxygen, it tells you when your stress system is active and it shows you the duration and the quality of your sleep.”

It’s been a long and sometimes unpredictable journey for Duncan in his own quest for ikigai. “I’ve worked previously as a site engineer, project manager and development manager. I also built our house in my spare time which won an environmental award before the [Boxing Day, 2004] tsunami happened and I was seconded into a UN housing reconstruction team in Sri Lanka.” Ultimately, Duncan says, he lives his life by a model called Appreciative Inquiry, which encourages exploration and discovery to make self-determined change. “This approach is largely based in figuring out what’s already working; finding those bright spots which are illuminating our road to action. In becoming an Executive Coach, I’ve learned how to help other people shape those pathways for themselves.”

Duncan set off earlier this year on a “wellbeing sabbatical” to Europe to reflect and consider what comes next. “I believe it’s critically important to take longer breaks when you can. After 28 years with Lendlease, I knew I needed to do some learning and find new inspiration. I was invited to speak at the European Positive Psychology conference and I travelled to Reykjavík in Iceland to share my experiences in using positive psychology techniques to embed habit change. After that, I followed my passion for sport to see the Tour de France in Paris and then, more significantly, I walked 220 kilometres solo from Lake Geneva in Switzerland over the Alps to a place called Aosta in Italy. I wanted to walk, learn and live again; refresh myself for the next part of my career, which could still be another 20 years or more.” 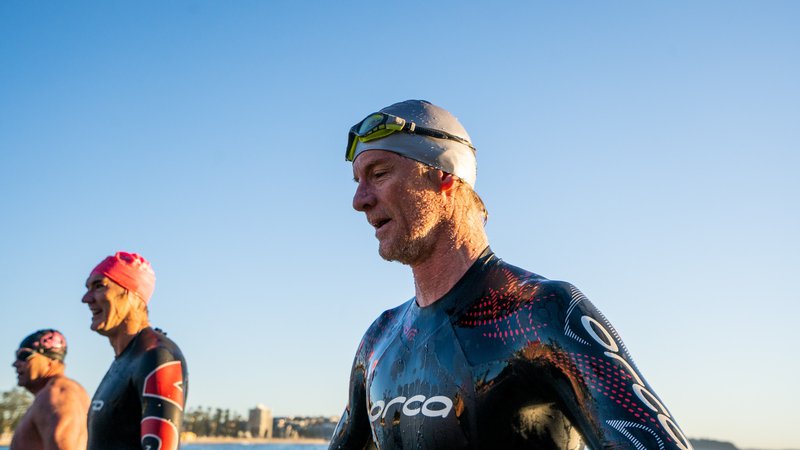 His advice for those seeking greater wellbeing? Think incrementally, and be specific. “Wellbeing is a continuum which I find helpful to view through the lens of marginal gain. If you do 1% better today than you did yesterday, you’ll be doing 37x better by the end of a year. It’s like compound interest for good habits. And if there’s a new habit you want to build, make it easy and map it out. Instead of saying ‘I want to start swimming’, specify a place and time each day that you’ll go swimming with specific people. Then put the groundwork in place to make that as frictionless as possible, things like laying out your swim trunks the evening before and going to bed an hour earlier.

“Wellbeing is a skill of daily intentions that anyone can use. For individuals, it increases your quality of life. For corporations, it has a flow-on effect through your whole business. And for those who are responsible for the creation of our built environment, everyone has a part to play. Designers, developers, construction professionals, we all must be thoughtful of the big-picture meaning and legacy of the spaces we’re creating.”

To learn more and connect with Duncan, visit https://www.duncanyoung.com/ and check out the Build Your Ideal Day podcast on any platform where you like to listen. 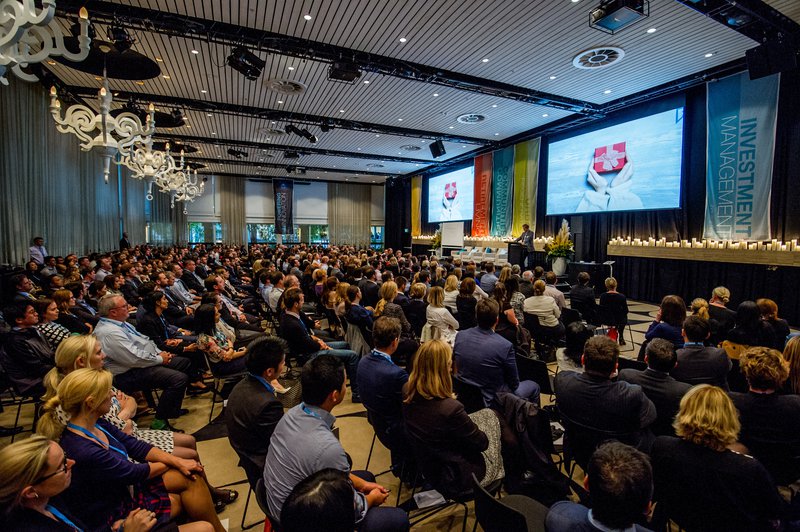