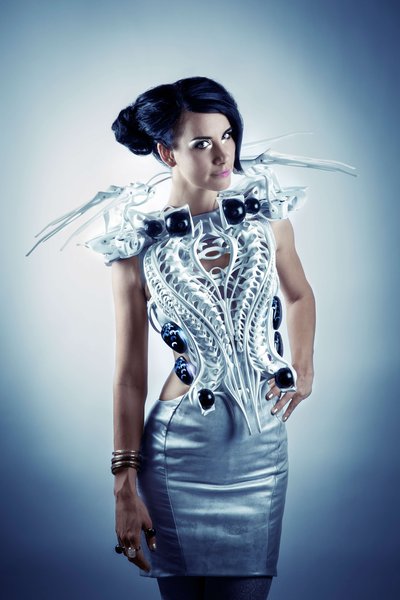 “Garments are the closest thing to the skin, which makes them the perfect interface”

"Find the balance between embedding new technologies into your products without it being harmful.”

“Garments are the closest thing to the skin, which makes them the perfect interface,” says Dutch Miami-based FashionTech designer, roboticist and innovator, Anouk Wipprecht.  This concept of ‘fashion as interface’ is a key theme which ties together Anouk’s hugely varied and innovative body of work over the last 20 years.  “A textile or a 3D print can form the ‘host’ for these pieces of technology connected to the body.  Some designs are very H.R. Giger-style exoskeletons and, in other designs, the technology is hidden and you don’t even see it, but it’s still technology hosted on the body.”

A natural introvert who spent her childhood in the Netherlands observing the world around her, Anouk took an early interest in fashion as self-expression and began to study fashion design and tailoring as a young teenager.  “A few years into my education, I started to realise that fashion might be expressive, but it was very analogue instead of reactive.  It was then that I got really interested in robotics.  These robots had the ‘brain’ and the technological ‘heartbeat’ that I wanted my garments and fabrics to have.  I started exploring stories about fabrics coming to life and living with us.” 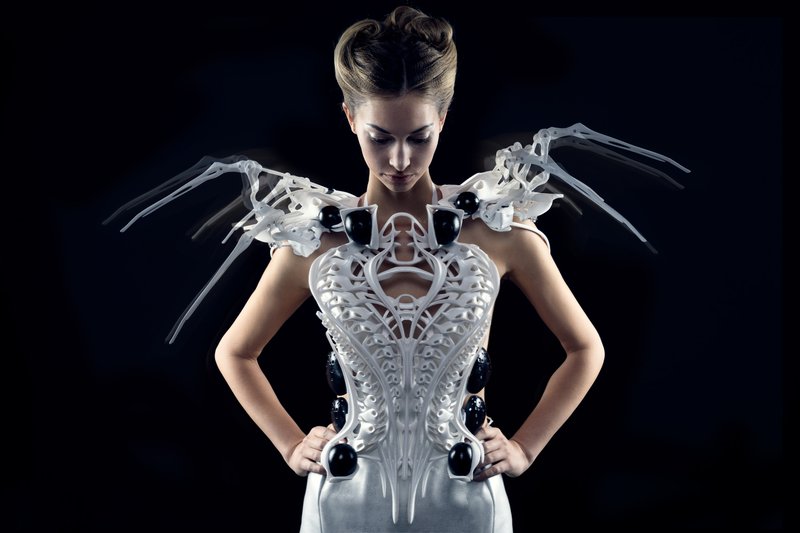 The possibilities and applications for Anouk’s work have grown exponentially with the technology over the last two decades.   “In 2000, I was trying to place fairly big computer boards on the back of my dresses which was not always very elegant.  But, by 2007, my designs really started to take off and allow me to travel all over the world.  In 2015, an open-source company called Arduino introduced single-board microcontrollers and kits for building digital devices.  This allowed me to integrate a smaller computer board into my designs that was also easier to programme... Open-source is the world I grew up in; I am always trying to support it where I can.  I try to find ways to open-source my projects, both to document my own work and for others to learn from it.  We all have these tools – 3D models, code, hardware, design, patterns – sitting in our computer folders that we don’t do anything with.  Why not open-source it so other designers might be able to learn from it?”

Anouk’s passion for technology and innovation is far-reaching and spans sectors and genres from video games to the automotive industry.  She regularly attends industry conferences, spends endless hours researching new technologies and often takes inspiration from unlikely sources.  One of her most well-known creations, The Spider Dress, was based on cult-favourite video game LIMBO.  “At one point, the character encounters a spider.  When you walk up to the spider it tries to attack but when you move away it stops.  I was really fascinated by this motoric-sensoric interaction between the proximity of the two characters and I created the dress based on that.”

Even more relevant in a COVID-19 context, Anouk has recently revisited her work with personal space and proxemics with a creation called Proximity Dress that was crafted in March of this year.  “It creates a physical visual boundary for social distancing.  It had mechanical hips that could expand and proximity and thermal sensors in the collar so when someone comes close, the dress activates and expands.” 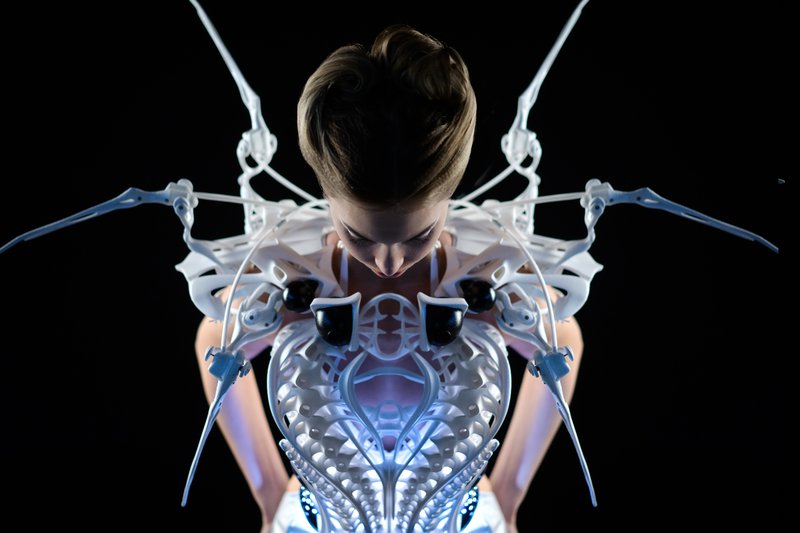 This design reflects a quiet thoughtfulness to Anouk’s work which extends beyond just a boundless technical curiosity.  “I think you need to leverage using technologies that are non-invasive, understanding the restrictions.  If embedding a camera is harmful from a privacy perspective, for instance, what can you use instead?  Can you employ technologies like thermal and proximity sensors to see in different ways?  People often think of restrictions as bad things; I see them as challenges.”

Anouk is now taking this opportunity mindset into robotics design for people with physical or intellectual limitations and has been working on ways to help them have sensory experiences in different ways.  “One current project that is coming out next month is for the game company Ubisoft where we created a prosthetic arm for one of the characters in the game and we recorded the character in real life.  It was right when COVID-19 hit and I was afraid it would derail the process but, since the use of digital tools, software and electronics is easier than ever, it didn’t impact much at all.  Instead of scanning the performer myself,  I sent her to Brussels to a 3D scan company and from there we could start to build her socket and liner with the prosthetic company and I started the design.  The 3D printed prosthetic arm and instructions were then delivered to Ubisoft in Paris.  It’s great that we live in such a digital era.”

"It’s great that we live in such a digital era.”

Anouk is currently working with a NeuroTech company on a project based on electroencephalogram (EEG) tests which evaluate and visualise the electrical activity in the brain.  She is also exploring the potential of emerging soft-robotics technology through a new robotic dress which uses soft-robotics and pneumatics.  In the future, she sees genuine potential for FashionTech in the mainstream and is excited to see some of its principal barriers being addressed through new tangential technologies such as washing machines that do not need water to clean electronic fabrics.  “This is a great example of how the industry comes in and tries to solve some problems with us.  We need this now with battery solutions as well.  How can we replace their traditional square and bulky shapes with round, flat and organic shapes?  Or how can we use kinetic energy or solar cells to power the designs instead?”

It’s clear that Anouk’s passion and curiosity for this unique intersection of fashion design, engineering, robotics and science has only increased with experience and new technologies.  “Technology came into our lives to help us, but often ends up overwhelming us instead.  How can technology be more sensory, more observational, more helpful in new ways?  For me, that is to connect these technologies to our bodies so that they can ‘feel’ with us.”

She also encourages anyone who is interested in sensor hardware or design technology to engage with the open-source community.  To get tech to get started, check out adafruit.com sparkfun.com or arduino.cc.  For hardware, visit hackster.io or instructables.com.  To explore EEG technology and BCI (Brain Computer Interfaces), explore the openBCI community.